A little over a year ago our family visited LEGOLAND California.  We all had a blast and highly recommend it.  For us LegoLand was doable with five kids and two adults, unlike the other highly sought after theme park in Southern California.  Not to mention cheaper and one day was just enough.  Even though we were there from opening until closing.

While at LEGOLAND we found out about the Lego Club Magazine.  We subscribe (for FREE) to both the regular magazine and the Jr. version.  Aidan and Coda love that day each month that the magazine comes in the mail.  Within minutes they are working on that months contest, determined to win the $100 gift card to buy nothing but LEGOS.

I have a confession, they build, I take a photo and I NEVER get it printed off and sent out in time.  BUT...this month I redeemed myself.  We're still awaiting the results, but here is Coda and his "Blue Bird".  (This month was to build a flying creature/animal.) 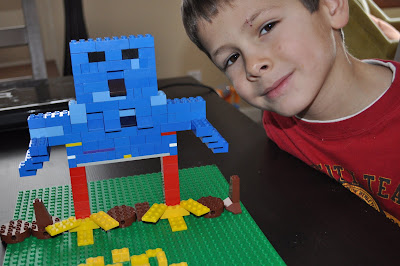 So make sure you head on over to Lego Club and get your own FREE subscription!!
Posted by Stephanie at 4:05 PM