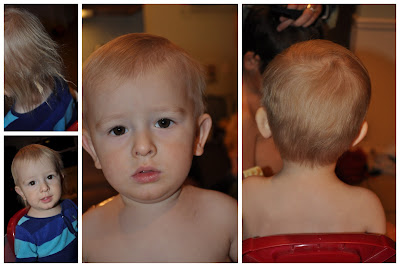 Jericho has been needing a hair cut for quite some time.  I was having such a hard time making the leap, knowing that the finished product would result in my baby looking SO much older.  He had some awesome dreads forming and for a moment we thought about just growing it out & letting it dread naturally.  But, since his hair on top is so much shorter he would have had a dread mullet, which I didn't think would look so hot.  Finally, Nick stuck him in his high chair, pulled out the clippers & the scissors and called me in to work my magic.  The dreads are tucked safely into a baggie for future oooooooo-ing & awwwwww-ing.
Posted by Stephanie at 9:52 PM