Packing Up, Heading Out

Tomorrow early afternoon we are leaving the St. Louis area and heading out.  Our first stop will be Arkansas where Nick has some things to tend to at his the company that he works for headquarters.  After that we are for sure (but the kind of for sure that half way there could change) heading to Prescott, AZ, up in the mountains where the high is about 85 right now, that sounds yummy.  This will be our first leg of the adventure that does not involve us driving in separate vehicles.  Since we have been in St. Louis we have purchased a 2002 Ford Excursion, 7.3l Diesel.  This truck fits all of us, will tow the trailer mucho better and will be converted to run on waste veggie oil in the future.  All good right??!!  No quite.  We use to tow the trailer with a Chevy Express cargo van, with tons of space for our stuff in the cargo area.  Now that we don't have that space we have had to downsize some more and now we are having to be very creative in where we put things while we are traveling.

We have been very blessed that our trailer has a bedroom in the back with four bunks.  I cannot stand the idea of making the table and sofa into beds each night and then putting them back together again in the morning.  Plus, the children & I love that each of them have their own space.  Anyway back to the point.  We had to make the ultimate decision that when we are traveling from job to job, we will have to put STUFF on Téadora & Dillon's bed and they will have to sleep on the table (that turns into a bed). 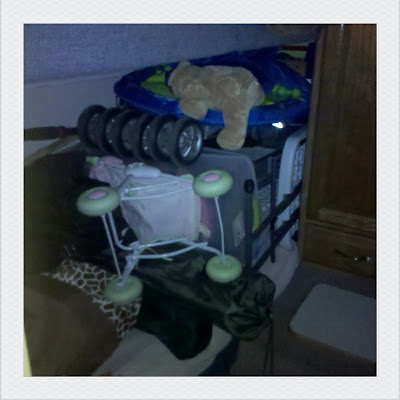 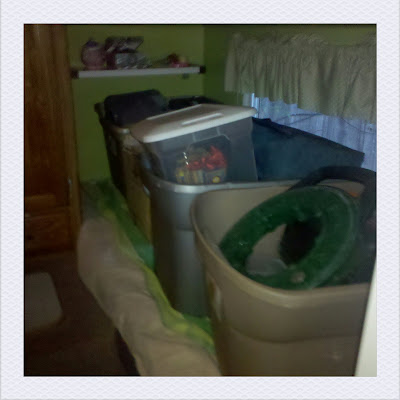 They have to sleep here... 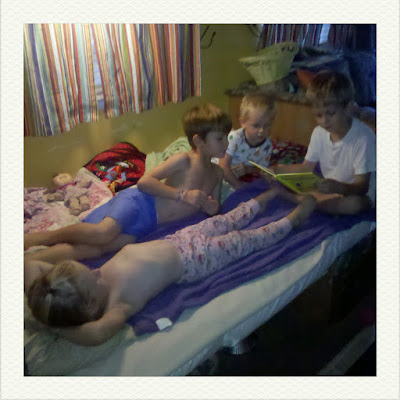 Not such a big deal.  That is until I want to talk on the phone after everyone is asleep...that's right I sit on the pot and talk to my bestie in California.  :)  I will take the stuff on the bed any day considering the alternative.  Now I get to sit back and play co-pilot and stewardess and not drive thousands of miles with five children by myself.  Loving it already!

I know I haven't even told you what we have been up to for the last two months in St. Louis.  I will let you in on all things great & wonderful about our time here, it might just take me awhile.  We didn't spend as much time exploring as usual (darn broken foot), but we got around, and we met some of the MOST.AMAZING. people at Invigorate Church in Columbia, IL.  Love you Invigorate family.  Let me leave you with this, St. Louis is the first place in one full year of traveling that we do not want to leave and I am believing that we will be back.
Posted by Stephanie at 8:31 PM

Email ThisBlogThis!Share to TwitterShare to FacebookShare to Pinterest
Labels: Churches on the Road, Friends on the Road, Illinois, Life in a Travel Trailer, Missouri, Seven on the Road