Thursday, June 3, 2010 - 187 miles
We left Phoenix heading towards Dallas, TX.  We were going to make a few stops along the way.  Nick was going to work for a few weeks in Dallas, TX before we headed to Southeastern Texas for an 8 week job.  The first night our destination was Winslow, AZ.  I couldn't help but sing over and over and over again that song by the Eagles.  I didn't know all the words and Aidan was getting tired of hearing the same line again and again, so I pulled it up on YouTube and we listened to the whole song over and over and over.  I fell asleep that night in between a school bus and a horse trailer at the Flying J Truck Stop.  (side note: Flying J's are super RVer friendly, they allow free overnight parking and a lot even have dump stations.)

Friday, June 4, 2010 - 268 miles
The next day we drove to Albuquerque, NM.  We were having some power tongue jack  issues and so we stopped at Camping World to pick up a new part.  We headed next door to the Enchanted Trails RV Park, long pull-thru sites, full hookups, swimming pool and ONLY $14 (with our Passport America membership), I was a happy camper.  Plus the fact that they had the cutest retro trailers all restored and decorated.  (Stupid me didn't take any photos.)  We piled back in the car and headed to Old Town Albuquerque to see what a village founded in 1706 looks like and get some dinner. 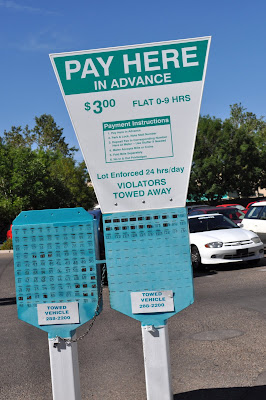 This is how you pay for parking in Old Town Albuquerque, literally stuff the cash into the slot. 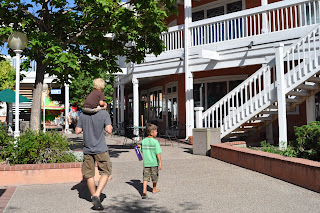 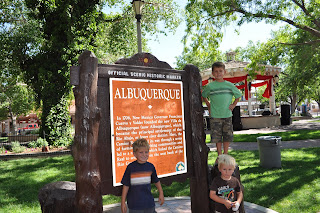 We walked around, stopped in a few shops and then made our way to Church Street Cafe.  We found Church Street Cafe on Yelp (oh how we love Yelp, HUGE asset to travelers).  We wanted authentic New Mexican food, which is a mix of Indian and Spanish cuisine and that is exactly what we got.  I think my favorite was the sopaipilla - a puffed friend bread that you bite off the corner and pour in warm honey, yummy.
On our way back from dinner Nick got a call, asking if there was anyway he could change his route and go to Colorado Springs, CO for a few days to do a service call and then continue on to Dallas, TX.  Good thing we had only traveled to Albuquerque that day or we would have had to back track.  So back to the RV park we went, to revamp our travel plans.  Have I told you that our plans change frequently and drastically --- well if I haven't now I have :)
But first Nick needed to remove our old power tongue jack that wasn't working and replace it.  This was most likely going to be a few hour job, not to mention the few hundred dollars it set us back.  I usually don't get involved in repairs, but I happened to be out there talking to him when he was getting set up.  I looked over and saw some wires (that I hadn't remembered seeing before) and asked it what they were.  Nick is always very gracious and explains things to me, even if it is common knowledge to him.  He walked over to where the wires were and started explaining, then running his hand down the wire said, "thats an inline fuse".  We were told the power tongue jack didn't have an inline fuse, but low and behold it did.  He removed the fuse, it was bad.  He hopped in the car, drove next door to Camping World, running in just as they were closing the doors, picked up the pack of fuses and was back to the RV park minutes later.  He switched out the fuse and presto, the power tongue jack was working.  Few hundred dollar part to be returned the next morning, hooray.  We celebrated by taking quick dip in the pool and then headed to bed.

Saturday, June 5, 2010 - 378 miles
Nick wasn't due in Colorado Springs until Monday, so we could have taken two days to get there.  Then we looked at the route and didn't see much we wanted to stop for, so we went ahead and drove from Albuquerque, NM to Colorado Springs, CO in one day.  I fell in love with Northern New Mexico; rolling hills, pure white clouds on bright blue sky, little farms here and there, once in awhile a little town would pop up, absolute beauty. 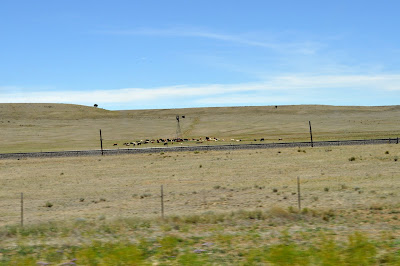 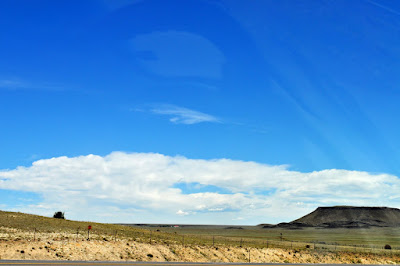 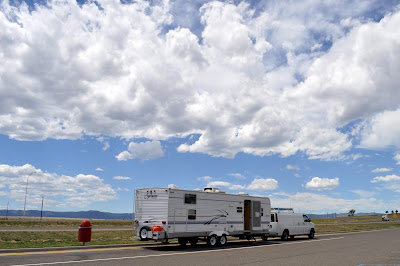 We stopped about 1/2 way for a lunch break.  The kids and I arrived about 15 minutes before Nick, so we played tag on the grass and relaxed on a blanket under a tree.  When Nick arrived we all piled into the trailer and I made lunch.  I love about bringing our house with us as we travel.  A day of traveling isn't filled with fast food and eewie public bathrooms, I cook in my own kitchen and we all use our bathroom.  The next leg of the drive had some pretty steep inclines.  I am always ahead of Nick and so when we come to steep hills or mountain areas, the children I pray that he makes it up.  Thankfully each time he has and this time was no exception.  He does drop down to 20 MPH sometimes, but he usually follows behind a big rig that is going about the same speed.  He feels like he could walk up the hill faster, I am sure it feels like he could.  We arrived in Colorado Springs around 4pm and checked into the Colorado Springs KOA.

Photos from Phoenix, AZ to Albuquerque, NM to Colorado Springs, CO here.
Posted by Stephanie at 10:26 AM