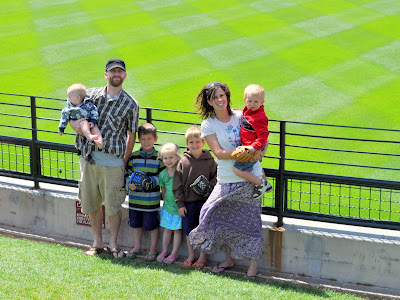 March 2010
For the first part of the month we were still in Eureka, finishing up the trailer renovations and spending time with friends and family.  We left Eureka to heading for Phoenix, AZ on March 15.  Along the way we stopped at The Avenue of the Giants, then in Santa Rosa, next was Solvang and our last stop before getting to Phoenix was Quartzsite, AZ.  We arrived in Phoenix on the 20th and immediately fell in love with the RV Park and the weather.  Our first week in Phoenix we were able to attend an Oakland A's Baseball Spring Training Game, such a wonderful day.

Nick is getting back into the groove of working.  He is getting somewhat addicted to skateboarding with the big boys and enjoying that his guitar is always within arms reach.

I began running a few weeks ago and am loving my "me" time.  I, too have been getting back into the groove of Nick working, boy could I get use to him being around more.  I have been working extra hard at being really "present" with the children; listening to them when they talk, playing with them and just exploring life with them, what a blessing it is, to see this vast world through their eyes.

Aidan is still drawing and loving riding his skateboard.  Coda has been hard to peel away from his bike.  Téadora & Dillon are riding their balance bikes constantly.  All four of them are obsessed with chia and beg for it daily.

Jericho is 10 months old and began crawling last week.  He is such a sweetheart and loves his big brothers and sister, especially Aidan, they have a special bond and have since Jer was born.

We are going to be in Phoenix until the end of May and are looking forward to all the things there are to explore.  We are planning to see the Grand Canyon and go down to Tuscon to the Desert Museum, along with many other little adventures.

Email ThisBlogThis!Share to TwitterShare to FacebookShare to Pinterest
Labels: Arizona, California, Seven on the Road, The 12 Project