A broken bike is forbidden in our family.  The kids ride their bikes ALL.THE.TIME, hours and hours each day.  Coda's bike was broken.  The chain would not stay on.  Nick tried and tried, I tried (really I just looked at it and acted as though I was fixing it), Coda tried and tried and tried.  Finally we decided we needed to take it to be fixed.  The $50 Huffy from KMart had to go to the bike shop, that was enough to put me into a panic attack.  How much would this "fix" cost?

I used my handy dandy Google Maps on my DROID, which includes YELP reviews, found a bike repair shop.  Bike Dr, sounded good to me, he should know how to fix the $50 Huffy from KMart.  I called and he informed me he was a mobile bike repair ("mobile" business are VERY popular in the Phoenix area) and he would be in our area later that day.  Now I was really panicking...how much was a "mobile" bike repair man going to cost.  I had to not think about it.  I tried to tell myself it would be a learning experience for the kids and Coda would have a working bike. 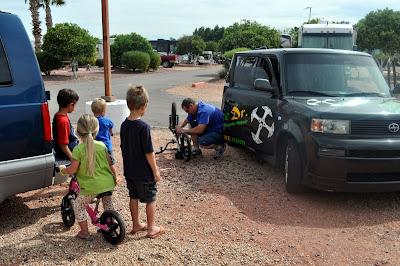 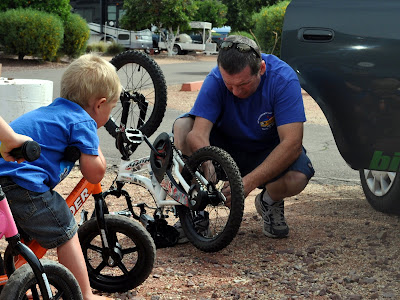 A few hours later Bike Dr. arrived.  The children were captivated.  He removed some extra washers that were left on after Nick removed the training wheels a year ago.  Bike Dr. and I began talking about our traveling life and that we were using this as one of our school "lessons" of the day.  From there the Bike Dr. took off, explaining what he was doing, asking the children questions, inviting them to help pump up the tires and straighten the handle bars. 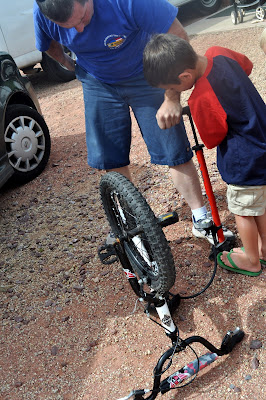 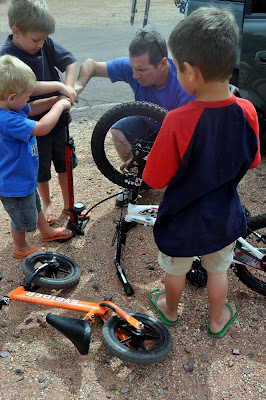 Photos from Phoenix, AZ here.
Posted by Stephanie at 10:48 PM

Email ThisBlogThis!Share to TwitterShare to FacebookShare to Pinterest
Labels: Arizona, Learning on the Road, Unschooling