A Danish Village, A Mission & Butterflies 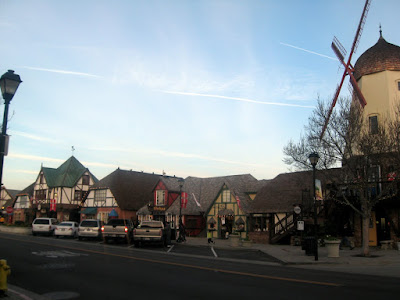 On January 31, 2010 we began traveling up the coast of California.  We had a loose plan of things we wanted to do and places we would stop to sleep.  Our first stop was in Solvang, CA, an Authentic Danish Village.  I had heard about Solvang, was told we HAD to stop, so we did.  I have never been to a Danish village, but Nick had and he says Solvang is as close to the real thing as you can get.  We arrived later in the day then we had planned, so most places were closing and it was quite chilly.  We stopped mid-town and saw a Danish bakery that was open for another hour, so we decided to make that our last stop.  We spent the next bit gazing at a huge windmill, wooden clogs in windows, beautiful architecture and saying over and over and over again that we must return here.  We ended the walk with a stop at the bakery for the most wonderful Dutch apple pastry. 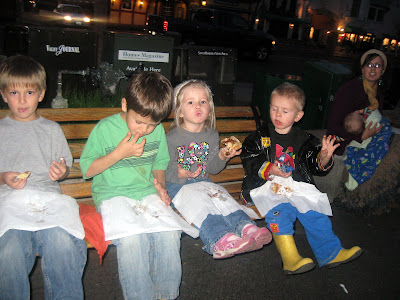 Our plan to stay in the San Luis Obispo Home Depot parking lot that night.  We had read online that this particular Home Depot was extremely friendly to RVers.  We had never experienced a night in a Home Depot parking lot so we weren't sure what to expect.  I had told Nick that if there weren't any other RV's there when we arrived I would like to find another place, I have a weird thing about being the only one staying overnight, I guess I don't want to be the only one getting my door knocked on if we aren't "allowed" to be there.  Well anyway, we arrived about 8pm and found 6 other RV's, so we pulled in and got settled.  By the time we went to be there was well over 10 RV's.  However, I was suprised the most that when Home Depot closed they left on all the lights in the parking lot except the ones in the back right corner...where all the RV's were, so thoughtful, I didn't have to spend the night with a streetlight blaring through my window. 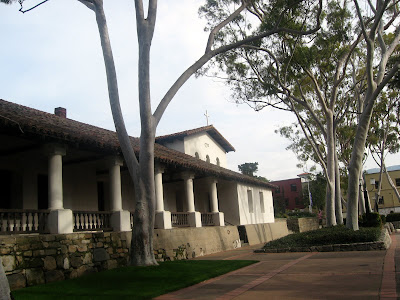 The next morning we were up and ready early, excited to explore downtown San Luis Obispo.  When Nick was young he did a report and model of the Mission San Luis Obispo, so we thought it would be a great learning experience to bring the children there.  We parked in downtown and meandered through the streets, where trees overhung and we could hear the whispering of a creek.  We found our way to the creek, which took us straight to the front side of the mission.  What a phenomenal feeling that is when your child realizes they are touching a 217 year old building.  We spent time touching the mission, looking at the mission and talking about why the California missions were built and who Father Junipero Serra was.  Attached to the mission they have a wonderful volunteer ran FREE Early California History Museum.  We all enjoyed seeing things from the past; arrowheads, dolls, Bibles, blankets, dishes, tables, doors, a well, the original bells and so much more. 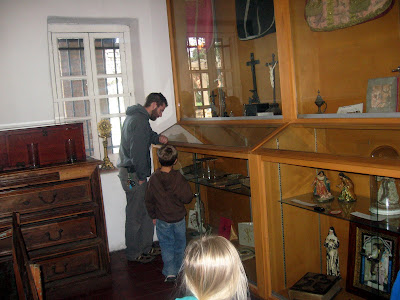 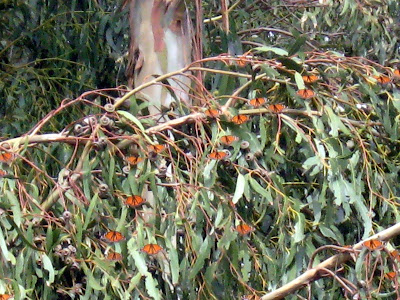 After the mission we went back to the trailer, made lunch and headed to Pismo Beach.  We were so excited when we had realized that the monarch butterflies were in Pismo Beach at the same time we were.  Each year thousands of monarchs go to Pismo Beach for the winter.  To see THAT many butterflies is magical.  They fly around you, above you and some will land on you.  There are so many butterflies that the green trees look orange.  They have wonderful volunteers that showed the children the life cycle of a caterpillar to a butterfly all with live naturally occurring pieces.  Now if that doesn't bring The Very Hungry Caterpillar or stories of Hermie to life I am not sure what does.  There is a little gift shop with books, stickers, bookmarks and postcards.   Living on the road we have to be very purposeful in what we bring into our trailer, so we opted to buy three postcards and send them to three family members.  When we got back to the trailer we spent a little time writing on the postcards and addressing them.  Aidan has been incorporating a lot of letter writing in his schooling this year so he headed up the project.  That night we had a first, we parked at a truck stop overnight.  At first I was a little leery because of all the noise of trucks coming and going all night long, but we were all so tired that it didn't phase any of us.

Email ThisBlogThis!Share to TwitterShare to FacebookShare to Pinterest
Labels: California, Free Overnight Parking, Learning on the Road, Seven on the Road