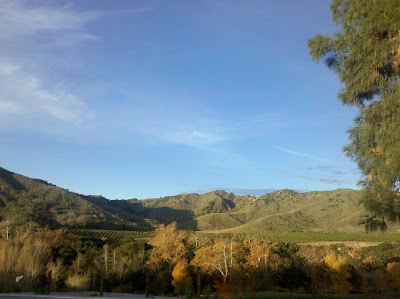 We had all of our belongings in the back of the cargo van.  So after checking into the Ventura Oaks KOA in Santa Paula, CA we began unpacking.  I kind of wonder what our fellow RVing neighbors thought.  It seemed never ending.  We have seven people, so the clothing alone is a task to unpack.  We have a good amount of storage under the trailer so each of us have about a weeks worth of clothing inside and we can easily access the rest.

While Nick and I were busy unpacking and making the trailer feel a bit more like home, the children were exploring the campground.  It is a wonderful feeling to open the door and let your children to run and play.  It is freeing for both me and them.  This specific campground is home to dozens of wild peacocks.  They were absolutely beautiful.  We were able to get within a few feet of them numerous times.  I did scream when I saw one fly, it was the craziest thing, for some reason I thought they didn’t fly, but they do.

On day three we had our first accident.  Coda and Aidan were playing outside.  Dillon opened the door and stepped out to walk down the three steps, only the steps weren’t there.  He fell to the ground, landing on his arm and then falling back to hit his head on the metal door jam of the trailer.  Coda had folded the steps in, so when he and Aidan were racing they wouldn’t trip over them.  Well, within 5 minutes, all seven of us were loaded in the car, headed to the nearest ER.  After about 2 hours of being in the ER, we were told there were no broken bones, but Dillon had a pretty bad concussion, we had to watch him closely for the next 48 hrs.  We have four boys; I can only imagine that we will be seeing a few more near disasters in the coming years.
So now a funny story ~ I was a little nervous to take a shower, I knew we didn’t have a large hot water heater, I believe it is a whopping 6 gallons.  I do not usually take long showers, but I like them a bit longer than the time it would take to pour a 5 gallon bucket of water over my head, which is essentially how long our hot water lasts.  But I finally braved it.  I got in, my toothbrush in hand, I love to brush my teeth in the shower.  By the time I was rinsing my mouth the water was luke warm.  ARE YOU KIDDING ME?  So I got out dried off and tried again about 10 minutes later.  This time I got in, got wet, turned the water off, soaped up, turned the water back on and relished in the next 3 minutes of rinsing in hot water.  Just so you know if I visit you, yes I have my own shower, but can I use yours, PLEASE???!!!
Photos from our week at Ventura Oaks KOA here.
Posted by Stephanie at 11:05 PM

Email ThisBlogThis!Share to TwitterShare to FacebookShare to Pinterest
Labels: California, RV Parks, Seven on the Road